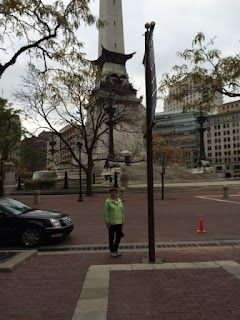 Magna Cum Murder is a mystery lovers' convention held each year in Indianapolis, IN, the last weekend of October. It's organized by Ball State University's Kathryn Kennison, who's a little dynamo seen everywhere, making sure things are going well for everyone. Since it's held at the beautiful Columbia Club on Monument Circle, literally in the middle of Indy, there's plenty to see as you walk around the hotel and the downtown. Since it was Halloween weekend, we saw some strange sights, like a Pedal-bar full of witches (sorry, I didn't get a pic of that one) and a wedding in the hotel grand room with most of the guests in full costume. (How would you like to have Beetlejuice at your wedding?) 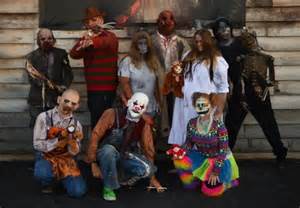 The weekend was spent discussing mysteries, both on formal panels and informally in corners of the hotel. Guest of Honor was William Kent Krueger, who is one of the best mystery writers out there today. He's from Minnesota, so many of his themes speak to Michigan people. 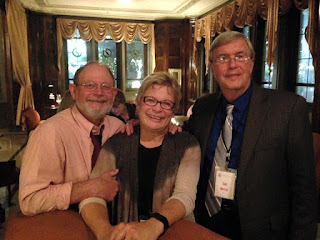 This year I spoke on strong female protagonists and spooky mysteries. Peg took the lead on the spooky topic, since the Dead Detectives are hers. I had my say about tough women, and I was particularly glad to be able to answer an audience member's question: "Don't female lead characters have to be young, attractive, and good at martial arts?"

Retta would argue that a person can be attractive after "young" is no longer applicable, and Barb would certainly take issue with the whole question. I'm so pleased that the Sleuth Sisters books do well, because we need to recognize that women over fifty can still be interesting and do interesting things. I never wanted my Sleuth Sisters to be the snoopy old lady type, but they aren't in the Supergirl category either. They're real people to me, and it's gratifying when readers feel the same way.