Here Are the Research Headlines I Want to See

1. People Who Live in Multistory Homes Live Longer
"Researchers at the University of Elderberry have found that the frustrating fact that what a person wants is always on a different story of their home than where they are means that muscle tone is..."

2. Waiting Lowers Blood Pressure
"Long waits at the doctor's office or the repair shop cause a drop in parental blood pressure as forced relaxation kicks in, a study at Mary-Mariman Hospital finds..."

3. Taking Vitamins Guarantees Health
"The simple act of taking a pill every day works to lessen stress on the body, leading scientist Art Griswold announced today. 'It's a faith thing," Griswold said. "If you believe you're doing right, your body reacts to that belief, releasing toxins and healing itself.'"


Are any of those true? No, but in a perfect world they would be.
Posted by Author Peg Herring at 6:27 AM No comments:

The Pros and Cons of a Series

I'm working through the final edits of Sleuth Sisters Mystery #3 (MURDER IN THE BOONIES).
I enjoy writing the series, and people have been really nice about letting me know they're waiting for the next one. Writing a popular series means I have characters I already know (which makes them a little easier to write), a guaranteed audience (which translates to income, so I'm not writing solely for my own enjoyment), and a following that spreads the word about the books much farther than I could do on my own.

The down side comes with promotion, and while it isn't a big deal, it's interesting. Selling a series means you start with Book #1. Very few people want to start reading a series in the middle. While it's possible to jump in midstream at times, it's usually best to get to know the characters from the first. So when I go to events like author fairs and book signings, I sell a ton of THE SLEUTH SISTERS (and usually run out) but fewer of 3 SLEUTHS, 2 DOGS, 1 MURDER. People want to read the first book before they go on to the others.

Now I did have a woman at Saturday's event who bought Book #1, went away and read a few pages, and came back to get Book #2, but that isn't going to happen all the time. Those who buy the first book can buy the second anywhere they want to, but they'll seldom see me again. The result is that I haul Book #2 around but sell mostly Book #1. Now that it's time for Book #3, I see the same thing happening. Being an orderly sort, my tendency has been to get equal numbers of books to take to events, but I'm thinking I need to adjust. Lots of Book #1. Once they enjoy that one, readers will find the succeeding installments on their own.

Posted by Author Peg Herring at 6:33 AM 4 comments:

The Cat as the Villain

How about a book where the cat is the murderer?

My old cat has taken to sleeping on the stairway. When it's dark or when I'm carrying an armload of sheets or whatever, it's easy to miss her presence, and several times in the last few months I've almost gone tush over teakettle down the stairs.


Now she's old. It might soothe her dementia-fogged mind to sleep on the stairs, halfway up so she can see what's happening on the main floor and still run for cover if the evil Vacuum Monster comes out of its lair or--worse yet--if STRANGERS invade her home.

But she could be plotting my death. I mean, who'd suspect her?


NOTE: I'm giving away books all week on the www.pegherring website. Stop over and make a comment to get in the running for the book of the day!


Posted by Author Peg Herring at 4:03 AM No comments:

Guns, Cats, and Quilting--How's That for a Topic? 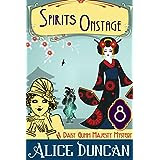 I'm reading a book by author Alice Duncan, who writes a series I'd call cozy historical with a fake medium as the protagonist. Daisy Gumm needs to earn a living, so she hires out for seances and such, and she always seems to get pulled into solving a crime. 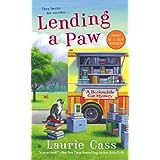 I enjoy the books, but that's not why I bring them up here. My topic, guns, cats, and quilting, was suggested by the fact that it's obvious in the series that the author loves dogs.

Another friend, Laurie Cass, writes a series in which a cat named Eddie plays a major role. I know for a fact Eddie is real (though his participation in solving mysteries is not), and he's very well-loved by the humans he deigns to associate with.

A third author friend, Barbara Graham, writes a series of quilting mysteries, and while you don't have to be a quilter to enjoy them (I'm not), those who are clever enough to quilt like the books even more because of shared insider knowledge. 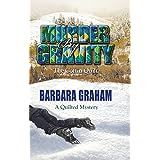 As a reader of a wide range of fiction, I've often noticed how a writer's likes and dislikes appear in his/her books, which in turn affects who buys those books. For example, my husband buys thrillers and often recommends authors he thinks I should try. I sometimes do, but too often I find their fascination with guns, bombs, and other forms of weaponry makes me skim ahead until the story gets back on track. Obviously, that's not the case with a lot of readers, or those authors wouldn't be mega-best-selling authors.

Often writers allow social issues to leak into books that are at heart genre fiction. That's not a bad thing unless they feel compelled to hit readers over the head with their views. I used to buy a thriller series that disintegrated into anti-government ravings somewhere around Book #6, at which point I gave it up. Still, writers like Sara Paretsky slide social commentary into their books without irritating me or her legions of fans, so I know it can be done if the hand that writes is clever enough.

So here's what I think about why we read what we read. We tend to settle in with authors who share our likes and our opinions about life. Is the world scary or basically good? Is a big part of it taken up with animals, a craft, or a cause? Does satisfaction come from watching big events unfold or from small, warm moments in time?

It's the answer to why you can love a book someone else shrugs off or even refuses to read.

As far as my own topic goes, I got lucky with the Sleuth Sisters. Most of us either have sisters or can relate to having them, so there's a big potential audience out there. Besides, in Book #3 there's a cat and a gun--Darn! I forgot to put in a quilt! (But there are dogs, horses, and reindeer: What's not to love?)

Posted by Author Peg Herring at 6:10 AM No comments:

ManyBooks Author of the Day

To receive notice when a book is released, please enter your name, email, and connection (reader, author, home town: something that lets me remember who you are!)