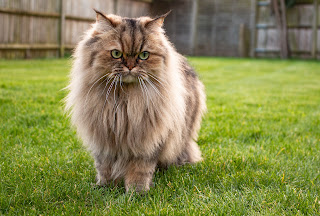 Cat lovers hate to admit it, but there are cats who are just plain mean. I submit they have reasons for it, some of which we can figure out, some we can't.

My daughter adopted a cat in Bahrain that was a perfect example of meanness. Like Professor Higgins in Pygmalion, he hated everyone. The reason, she was told, was that he'd been kept in a box for the first few years of his life, and probably mistreated as well.

He was beautiful, much like the cat in the photo above, though he was a gray. My daughter was good to him, and he learned after a few months that he could move around the house (He spent a long time hiding in a closet.) and trust her not to abuse him. This led the cat (Taz, short for Tasmanian Devil) to bond with her AND HER ALONE. The rest of us were fair game. If we walked along the upstairs hallway, he was liable to be lurking, and he'd jump out and slice our ankles bloody. If we came too close, he hissed and growled like a movie monster. And we knew never to try to pet him, even if he seemed to be asleep.

When my daughter left Bahrain to come home to the States, Taz had to have a kitty passport with his paw print on it. He also had to fly in the baggage compartment and sit in quarantine for several weeks. This sent him into madness, and they eventually called her to come and visit him, since he was pulling out his hair and refusing to eat. Her visits got him through, and he settled in with her in Virginia.

Then my daughter got sick. Her husband bailed, and she was unable to live alone, so she came to live with us. That meant Taz came too, and I never saw a more devoted friend. He stayed with her day and night, always gentle with her, though never with anyone else.

One day when I had taken her to a medical appointment, my husband went into her room and found Taz dead. He'd done all he could for her, and she'd done what she could to make up for his bad start in life. What better way for people and pets to be?

Once again, here's the link to Cats and Crimes, in which Taz is played by Professor Higgins, and does a bang-up job. https://books2read.com/u/3LVEz7