Sisters...and Then There Are Cousins

October 06, 2016
I had a visit from a cousin last weekend who is very close to me in age. We grew up far apart, so our encounters were few as kids. Our mothers were only siblings to each other, their brother having died young in an auto accident. They were close but un-alike. We lived in northern Michigan on a farm; my aunt's family lived in Chicago.
My cousin confessed her horror when they came to visit us in the mid-1950s and she learned we didn't have indoor plumbing. I was equally horrified when we visited them and found they lived in a concrete box: no woods, no animals, not even any grass to roll around in!
In many ways our lives are vastly different. She has three brothers; I have two sisters and one brother, which changes the family dynamic, even as adults. She saw the world as a young woman; I married early and pretty much stayed in Michigan.
So what do we share? Well, we're both a lot like Grandma, (She's the adult below) who was tolerant of society's craziness but smart enough to see past it and find what was good and true. We share the values our mothers demonstrated--not taught so much as showed in their lives. The message boils down to "Be nice to other people. It's not up to us to judge them."
And these days we share an enjoyment of reminiscing: looking at old pictures, reading old letters, and telling old stories we've almost certainly told each other before.
All my female cousins on the other side live close to me and pretty much always have. We also do a lot of reminiscing when we get together. It builds a sense of belonging, though we've lost the generation that created us and brought us together. It interests me how each memory is a little different, depending on who's telling it, and we often end up shaking our heads, not sure who remembers it correctly. Not that it matters... 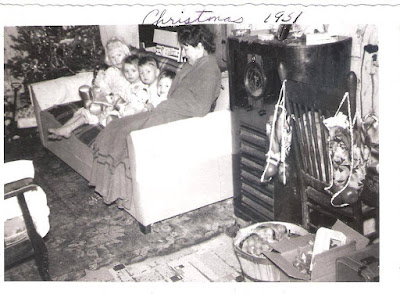