A Kinda Cover & a Thought-Story 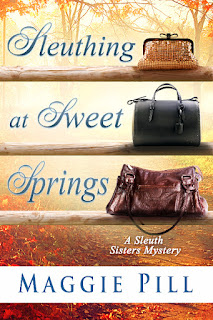 Here's the first version of the SS#4 cover. I asked for some change with the purses and the lettering, but I think overall it will work.

On a different note, watching political stuff (and I try not to) makes me think about how differently we think. That brought to mind a story meant to make you think about how you think (and isn't that as clear as mud!) We can have fun with it if readers share their opinions because, unlike politics, the fiction created here has no effect on you or me or anyone.


The Drawbridge Exercise
A baron once had to leave his castle for several days. As he said goodbye, he told his wife that she was under no circumstances to leave while he was away. Once the baron was gone, however, the baroness slipped across the drawbridge and went to see her lover. The next morning when she returned to the castle, a madman stood at the drawbridge, brandishing a knife. "Don't try to cross!" he shouted. "I will kill you if you do!"
The baroness ran back to her lover's house and told him what had happened. "Ours is merely a sexual relationship," the lover said. "I can't help with your problem."
Next the baroness went to the home of a friend and again related her situation. "You did wrong to disobey your husband," the friend said. "I won't help."
Returning to the drawbridge, the baroness saw a man with a rowboat on the shore. When she asked if he'd carry her across the moat, he replied, "If you have the money to pay me." She did not, and the boatman refused to help.
Having exhausted all her options, the baroness returned to the drawbridge and tried to get around the madman. She failed and was killed.
Your task: Put in order from most to least which characters are at fault for the baroness' death: the baron, the baroness, the madman, the lover, the friend, and the boatman.
FYI: No right answers here, just opinions, so feel free to justify your answers.
books challenge cover art covers game morality morals Sleuth Sisters story thought-game