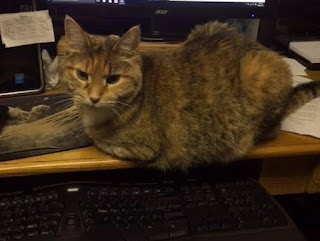 The second cat we meet in my upcoming book, Cats and Crimes, is Callie, though she would turn up her nose at second billing. Callie rules the household, at least in her own opinion. She's Lorilee's main confidante, and she simply knows that everyone loves her.

My Callie was actually named Trouble, and she was our longest-lived cat. She showed up in our driveway as an abandoned kitten in 1994, just after our son left for college, and she died over two decades later. In that time she became a full member of the family, and other cats came and went while she remained. Trouble liked being outside for most of her life and was in fact once lost in the wilds of Michigan's UP for over a week. She did fine with that, but when she got older and less agile, she became, like Callie, uncomfortable outside the house. That was probably wise with the fox, coyote, and predatory bird population on our property.

The cats in the story are a mix of cats I've known/lived with/heard about. Long ago, when we were first married, we had a cat who knew enough to jump up at doorknobs and smack them until the latch released. We've all seen the cat on the internet who shoves the mail back through the door slot. It was Trouble who liked to sleep between my feet, but if felt right to give that behavior to the Professor (whose bio is upcoming), since he'd had such a rough life before meeting Lorilee.

I hope readers enjoy getting to know Lorilee's cats, and if you share your own cat story in the comments below, I'll put you in the drawing for a free print copy of the book.

You can pre-order here: https://www.amazon.com/Cats-Crimes-Maggie-Pill-ebook/dp/B0BHZBZ9CX. If you're not an Amazon person, I will soon have it up for pre-order on other sites...There's just SO MUCH to do! 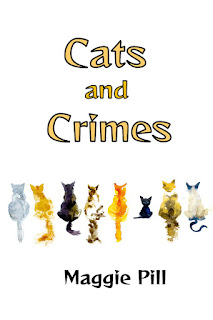