People often ask when the next book is coming out, and the answer at this moment is April 4th. This one is THIRD CRIME'S THE CHARM, and it's the 3rd installment of the Trailer Park Tales series. 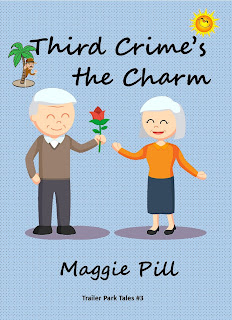 Some readers become confused about which books they've read and which they haven't. I have the same issue, and several times I've bought the same book twice. It seems to happen to me most often when I read it as an e-book. That doesn't sink in for me the way a print book does, so I realize about halfway through that I know exactly what's going to happen next and what this character or that one is going to say. Drat!

Here's a helpful guide for my books. A la Seinfeld, I've made a list in which your memory is prodded by a statement beginning with "The One Where..."

TRAILER PARK TALES (I was smarter with this series, using "once," "twice," and "third" as clues to the order.)

Once Upon a Trailer Park: The one where we meet the residents of Beautiful Bird RV Park after a man is found stabbed to death on a park street.

Twice the Crime This Time: The one where the gang is asked to investigate a murder from the 1960's as rumors circulate about a peeping tom roaming the park.

Third Crime's the Charm: The one where there's a missing policeman, a couple of unsavory men emptying a trailer, and the possibility of an online dating scam involving park residents.

The Sleuth Sisters: The one where we meet Barb and Faye, who intend to start a detective agency without sister Retta, who irritates them. Going to Michigan's Upper Peninsula, they solve the cold case of a man accused of murdering his pregnant wife.

3 Sleuths, 2 Dogs, 1 Murder: The one where Retta's current boyfriend is accused of murdering the wife she didn't know he had.

Murder in the Boonies: The one where the sisters find their old family farm deserted and have to find out where the renters, a couple with three young girls, disappeared to.

Sleuthing at Sweet Springs: The one where Faye meets a woman in a nursing home who claims she doesn't belong there.

Eat, Drink, and Be Wary: The one where Retta talks Faye into going to Michigan's Leelanau Peninsula to a women's retreat where crime is on the agenda.

Peril, Plots, and Puppies: The one where the sisters bust a puppy mill and Faye is determined to find each dog a forever home--even the big, scary one.

Captured, Escape, Repeat: The one where Retta and Lars stop in Green Bay, Wisconsin, and Lars disappears.