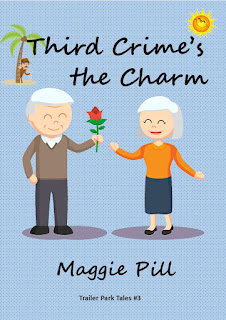 This time the folks at Beautiful Bird RV Park have to deal with (you guessed it) three crimes, the most serious one the disappearance of the local detective they've come to know a little. People don't just come to the park and vanish, but that's what Detective O'Connor apparently did. Of course the intrepid couples who solved the other crimes can't ignore this one, and as they investigate, they find two other suspicious situations.

Once I have a manuscript sorta-kinda ready for someone else to read, I send it to what I think of as my First Editor. She's an intelligent reader who knows me well, and she reads through the (slightly rough) story to give me ideas about how things are going thus far. I respond to whatever comments she has, and I find that by the time she's had the book for a few weeks, I've got a few ideas of my own. (Nothing improves a writers view of a work in progress like time away from it, honest!) At that point I do the first Big Edit, line by line, correcting errors, clarifying plot lines, and adding detail. I like to do this one with the computer reading to me, so not only do I see what's there, I hear how it sounds.

That step has been completed.

Next comes the "real" editor, a stranger I hire to really go at the book and look for problems. Since it's late in December, I'll wait until after Christmas to ask, but I'm eager to hear what she has to say.

After that will come the copy editor, another contracted worker who'll fix the odds and ends.

So if you're waiting for the next book in the series, that's the schedule. And if you're impatient to see it up for sale, so am I.