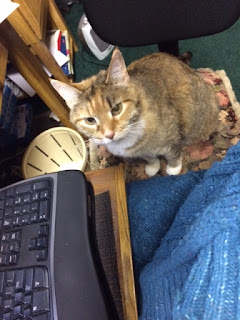 Earlier this year, we became the proud owners of a new camper. The plan is to do some traveling in the months to come, but we struggled with the problem of what to do with Old Cat. As our only remaining pet, she's become a bit of an obsession with us, and we both act completely silly as we try to do whatever she wants us to do, even though she's quite senile and doesn't know herself what she wants.
In the past we've tried boarding, which she hated, but at least she had Alice, her companion cat, then and they could reassure each other. We also tried taking them to relatives' homes, which worked pretty well. Right now, however, all the relatives who would take her have their own pets, and at her advanced age (she's 21) she doesn't adjust well to strangers. We've also left her in the house alone, having a relative stop in every day and check on her. (She seldom saw the cat and judged she was okay solely by the fact that the litter box needed attention.)
Since these trips will be longer, we want her with us, so we're going to introduce her to the camper life. We've got the stages planned out: time with us in the camper while it's parked in the yard, a short trip in the camper to get her used to the motion, and lots of reassurance from Mom and Dad.
Mom hopes she'll understand that this is how she gets to be with us and not get left behind. Dad thinks Mom will end up bloody.
camping cat old pets pets travel travel with cat travel with pet