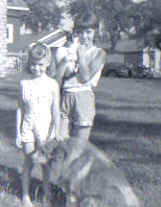 Here's a challenge: List all your childhood cats/dogs/whatevers in order.

Now I can't do ALL our cats, because we lived on a farm and there were cats everywhere, but the first cat I recall was Chocolate Bar, an adopted barn cat who let me carry him around like a baby. He was followed by Ching-a-ling, a temperamental Siamese who had no intention of letting anyone carry him anywhere. Ever. (His opinion was overcome for the picture at left.)

Our longtime collie dog was Laddie (also in the photo), who was useful for herding cows and as lovable as a dog can get.
When I was really young there was a workhorse, Rowdy. Later there were two ponies for the two of us to ride, Molly & Rusty, and an assortment of horses from Mackinac Island we boarded over the winter, notably Danny, who had his own mind about where you would go on a trail ride, and Dolly,  who became a permanent resident at some point. (Photo below) 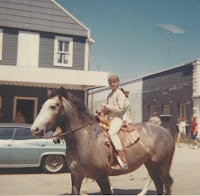 I never got close to the chickens, pigs and cows on the farm. In fact there was one cow who had it out for me and I swear, caused me to break my arm.

Since I left college, I have never been without a dog and/or a cat. When you grow up on a farm, it just seems weird not to have animal friends around.