The Cat Who'd Been Through Hell 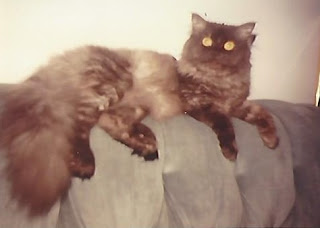 I came across these photos recently of Taz, who was my daughter's beloved cat for many years. He'd had a terrible life when they met. He'd been kept in a box and apparently tormented, so he'd developed a tendency to attack first. He was Persian, with long, gray hair and very sharp claws. The shelter (in Bahrain, where cats are not beloved) had intended to put him down until my daughter showed up one day and decided he was the cat for her.


It turned out that Taz was exactly the cat for her, though not for anyone else. After spending the first few months in a closet in her bedroom, he finally began venturing out, but she was the only one who could deal with him. Anyone else who invaded his territory got a snarl and a swipe, often even if you were just passing by. The maid who came once a week would knock on the door and immediately ask, "Madam, where is the cat?" She was terrified of Taz, and that was just the way he liked it.

When they were ready to move back to the States, Taz had begun to be less ferocious, but that's when his second trauma occurred. U.S. law required six weeks' quarantine, where he was once again put in a cage, removed from his human mommy, and left pretty much on his own. After a few weeks the people in charge called my daughter and told her the cat was pulling out his own hair, and they feared he would die. She was allowed to visit, and somehow he pulled through, eventually becoming the same old grumpy cat he'd been before.

Visitors in Taz's home were not wise to relax. He hid behind furniture, in corners, and especially on the stairway, swatting at your ankles as you passed or even at your head as you ascended the stairs. There was no such thing as petting him, and he was careless about grooming himself, so he was usually matted and lumpy and not very pet-able anyway. She would try to comb and trim him, but even she wasn't immune from attack when she did, and she always ended up bloody.

Then my daughter got sick. Her life fell apart as she lost her husband, her home, and her ability to care for herself. She had to move in with us, giving up her job, most of her possessions, and her friends in Virginia. The one constant that remained was Taz, who took up residence on her bed and became her watch-cat. He never again attacked my husband or me. Though he wasn't what you'd call friendly, he seemed to know that she needed us so he had to be tolerant. He was always there, even though her advancing MS made her likely to hit him whenever she tried to pet him. He stayed close, letting her know he'd always be true, no matter how out of control she got, and he was, right up to the day he went to sleep and didn't wake up.

When people speak of their fur babies, I often think of Taz. Life had given him a rough time, but one person cared enough to come to his rescue. As a result, he dedicated himself to her totally, despite the fact that he wasn't exactly a cuddly sort.
I don't know many people who are as completely loyal as that cat was, and I have lots of love for a critter I never petted, never held, and will never forget.